How do you know if your alpaca has an ulcer? Well, ulcers are mostly diagnosed by the process of eliminating everything else. Think possible ulcer if you see these symptoms:

In young alpacas you may observe these symptoms:

When calling your vet about a sick alpaca, don't forget to include recent activities. It is important for the vet to know if your alpaca was stressed. Have they been transported recently, gone to a show, weaned, or hospitalized?

Unfortunately, the only way to definitively diagnose stomach ulcers in camelids is exploratory surgery or at post mortem ,both of which are impractical. Diagnosis in other species involves passing an endoscope (camera) into the stomach, but the anatomy of the pseudoruminant stomach makes this task impossible. Ruptured ulcers may be diagnosed with ultrasound and laboratory analysis of fluid from around the abdominal organs (abdominocentesis). Usually, we treat based on suspicion from clinical signs or when the animal is sick, stressed and not eating, which promotes secondary ulceration.

A study has been conducted by Geoffrey Smith, DVM at North Carolina State University which offers more hope and a much more positive outcome than anti-ulcer oral pastes.  Pantoprazole has been demonstrated to reduce the acidity of the third compartment when administered either sub q or intravenously. The animals used in this study also had a cannula inserted into their third stomach compartment in order to test the pH of the actual stomach contents. When administered either IV or sub q, pantoprazole provided a slow, sustained, significant increase in pH, indicating a therapeutic level had been reached.  An effective and safe treatment now appears in pantoprazol for the use in both treatment and prophylaxis of camelid ulcers.  Talk to your vet before starting any treatment plan if ulcers are suspected.

PRevention of Ulcers in Alpacas

Ideally, you want to keep your alpaca from developing ulcers in the first place. Start by reducing stress:

Other things to avoid to prevent formation of ulcers:

Alpaca stomach ulcers have a high mortality. Prevent ulcer development by reducing stress and feeding an appropriate diet. A happy alpaca is a healthy alpaca.

Alpaca stomach ulcers are not uncommon. Ulcers can very easily lead to an alpaca death, so it is important to prevent this alpaca disease. Unfortunately, alpacas are stoic and it is hard to know that your alpaca is developing an ulcer until they are well advanced.

Death occurs because the ulcer has penetrated the stomach wall and stomach contents spill into the abdominal cavity causing peritonitis (infection). The alpaca’s condition rapidly deteriorates when this happens and the alpaca dies.

Since we do not want to lose an alpaca, preventing ulcers is important. How do we do that? Let's begin with the anatomy of an alpaca's stomach.

The stomach anatomy of camelids, which includes the species of alpacas, llamas, bactrian and dromedary camels, vicunas and guanacos, is unique. They are known as ‘psuedoruminants’,as their digestive anatomy and processes vary considerably from true ruminants (cows, sheep and goats). Like ruminants, camelids are foregut fermenters, and do perform regurgitation and remastication, known as ‘chewing their cud’.Instead of having four stomachs like the cow, the camelid has three stomach compartments that are basically diverticulums (widenings) of the esophagus. The compartments (‘C’) are referred to as C1, C2 and C3.

Some areas of the stomach contain glands which secrete mucous-like substances. C1 consists of nearly 85% of the stomach and constitutes most ofthe left side. It has both glandular and nonglandular areas, and it is the source of the smelly ingesta of spit. C1 leads into the much smaller C2, which lies along the right side and holds about 5% of the total stomach volume. C2 empties into C3 by way of a short, muscular tube which controls the rate of ingesta flow. C3 is a long, tubular structure lying low along the right side of the abdomen and contains about 10% of the total stomach contents. From here, ingesta moves to the start of the small intestine. It is only the final 1/5th of C3 which contains gastric glands secreting hydrogen chloride (HCl), that are considered actual stomach, and it is in the camelid’s third compartment that stomach ulceration tends to occur.

Third compartment ulcers are a common cause of illness and death in camelids, particularly those with colic and other gastrointestinal diseases. However, any time an alpaca is sick and stressed, stomach ulcers are likely to occur as a secondary problem

Inappropriate diet can, also, cause alpaca stomach ulcers. A diet high in grains is hard for alpacas to digest. Corn and wheat are the hardest and oats are the easiest to digest. So think a lot about what you are giving your alpacas for treats. 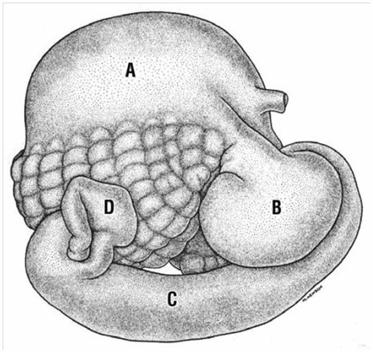