Warming weather in Southern California and in all parts of the United States brings with it a renewed threat of tick paralysis in animals and people. Alpacas are not excluded from this group, and we have experienced first hand tick paralysis in a young male alpaca on our farm.  Since then we are diligent in the control and treatment of ticks at the ranch.

Tick paralysis is a somewhat uncommon but potentially fatal disease that can affect virtually all warm-blooded land animals. The illness occurs when certain species of ticks inject potent toxins from their salivary glands into the host animal. The disease was first identified in Australia in 1824. Since then, more than 60 species of ticks worldwide have been identified as toxin producers.

At least two prominent species of ticks on the list of toxin producers are native to North America.  In fact, in North America ticks actually transmit more disease than mosquitoes. Tick paralysis occurs most in the northwestern and southeastern regions of North America along with the east coast of Australia and southern Africa.  Llamas and alpacas seem to be particularly susceptible to the effects of the toxin but it is not clear why. Occurrence of the disease is sporadic and is difficult to predict because the toxin does not occur in all tick populations all of the time or in the same local regions. And only female ticks attach firmly and engorge on blood from the hosts.

Symptoms in alpacas can begin within 24 to 72 hours after the tick attaches itself to the animal.  The animal's hind legs seem to be the first to be affected, followed by the forelegs.  If the paralysis affects the respiratory system, the animal will most likely die.  In our alpaca's case, the paralysis stopped at the forelegs, and although he was paralyzed for 4 weeks, he eventually recovered.

Death rates for tick paralysis have been reported as high as 10 percent or more in humans and around 7 percent in domestic animals. Medical literature shows that in most human cases of the disease, only a single tick was found on the patient.

“As dire as this disease sounds, though, treatment is effective and reversal of the paralysis can be rapid with an excellent prognosis,” says Dr. Parish, a large animal veterinarian who heads up Washington State University’s Agricultural Animal Service. “The key is to remove the ticks and provide supportive care. Recovery occurs very quickly in most animals and people within 48 hours, but llamas and alpacas seem to be hit a harder than other animals for reasons not well understood,” he said. ”Complete recovery could take up to several weeks in those species.”

If it is suspected that your alpaca is suffering from the affects of a tick toxin, it is important to check for ticks in and around the eyes, ears, nose, mouth, external genitalia and under each leg. Removing all ticks may require that an animal be shorn in addition to administering medication that kills any ticks still attached.

“Llama and alpaca owners working with their veterinarian will find the drug ivermectin to be very effective when used in the proper dosage,” said Parish.  “In addition to tick removal and ivermectin, it may also be necessary to use external chemical insecticides such as the pyrethrins. Certainly, tick repellants can help prevent ticks from attaching.”

In our alpaca's case, ticks in the ear were most assuredly the culprit as upon examination of the ear canal with an otoscope, ticks were found.  Our veterinarian prescribed injectable ivermectin, Frontline spray directly in the ear, as well as an antibiotics in the event of infection at the bite site. On our crias and pregnant dams, we routinely spray their ears with cedar oil, a natural alternative to chemicals in those animals that might be adversely affected by insecticides.  Alpaca and llama cedar oil spray can be found online.  The rest of the herd has their ears sprayed with Frontline monthly during the warmer months and always at shearing as we prepare for summer.

Ticks found on the body are best removed with curved tweezers, forceps or gloved fingers.  The tick should be grasped close to the skin and pulled with steady but gentle traction to ensure all the mouth parts come off with the entire tick. Other methods of tick removal famous as folklore, such as applying a lighted match or petroleum jelly to the tick, are reportadly not effective.

Ticks are difficult to control but measures can be taken to reduce the numbers present in your animals' environment. Paddocks should be clean, free of scrub, bladey grass, and if possible minimal exposure to native fauna, notorious for harboring ticks. If your alpacas are pastured, keeping the pastures short as well as pasture rotation can be very effective.  Vulnerable newborns and young cria should be kept in clean paddocks, especially for the first few weeks and checked regularly for ticks. Dog tick collars have also been used successfully.

The most important thing you can do to ensure your alpacas' health is to be diligent in observing them.  Always by aware that if an animal has a droopy ear it is a sign of discomfort.  An otoscope is one of the best tools you can buy to regularly check the ear canal for ticks and take appropriate action. Any animal lagging behind, dragging its back foot, or who is reluctant to walk on a lead should be observed carefully.

If you have an alpaca that you suspect might be suffering from tick paralysis, call your veterinarian immediately to begin treatment.  It can be a long process for healing, as noted above as long as 4 weeks, so don't give up!  Keep your alpaca as comfortable as possible, providing a safe place within the herd but protected from the elements.  Fresh water and hay should be provided at all times. 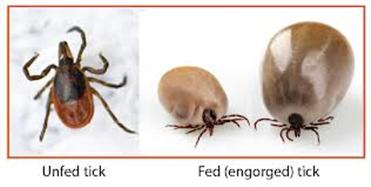