Most normal crias will start attempting to stand by ½ hour, succeeding by 1 hour after birth. Once they are up, they start attempting to nurse (usually start trying around 1 hour, succeeding by 3-4 hours). Once the dam and cria have bonded (usually when nursing is established), start dipping the navel with iodine or chlorohexidene 0.5% (repeat 2-3 times daily for 1-2 days) and weigh the baby. Normal (“average”) alpaca babies weigh at least 12 pounds.

Meconium is babies first “poop."  It is very sticky and brown and should be passed by the cria within the first 24 hours. Some babies have trouble passing it and may strain or begin to look lethargic, and need the help of an enema (we recommend human, adult-sized saline enemas.)  Insert carefully (just the tip) into rectum and squeeze just enough fluid in that you get a little resistance—you won’t use the whole thing.)  Some people routinely give enemas to every cria, others wait to see if the baby starts straining.  If you have any doubt, go ahead and give one, as there is not much harm that can be done from administering an enema (other than tearing the rectum which you won't do if you're careful) but meconium impactions can be fatal.

Colostrum is is vitally important for the survival of the new cria.  Crias get NO immunity in the womb, it all comes in the first 24-36 hours of life from mom’s first milk. This first milk is called colostrum. If mom doesn’t have any, or baby is too weak to suckle properly, you need to provide it. We usually have some colostrum on hand for emergencies, but it’s not a bad idea for you to have some of your own for “insurance.” Sheep, goat, or cow colostrums are reasonable substitutes for alpaca babies, frozen colostrum is superior to powdered and can be purchased online.  A new baby should get 10-20 % of their body weight of colostrum the first 24 hours (so a 20 lb baby needs 2 lbs of milk which is about 1 quart, divide into 4-6 feedings every 4-6 hours).

Failure of Passive Transfer (“FPT”) is what happens when a new baby doesn’t get enough immunity from colostrum. If a cria has FPT, it doesn’t automatically mean she will become ill, but she is much more susceptible to problems. For this reason, we recommend IgG testing questionable new crias at 24-48 hours of age. The IgG test tells us how much immunity the baby got from her colostrum. If it’s too low, we have the option of giving a plasma transfusion to “cover” the cria until her own immune system kicks in at several weeks of age. We recommend this test on all babies who may be slow starters or ones that you question whether or not they are suckling adequately and getting proper colostrum intake. You have a large investment of time and money in this cria, you want to make sure you prevent problems rather than having to treat them.

In chilly weather, help your new cria by towel drying its fleece.  Crias that have low body temperature (hypothermia) use up extra energy that they need. Newborns aren’t very good at regulating their temperature and so they may vary widely from 100-102.5F. If your several hour old cria isn’t acting normally, take her temperature, and if it’s consistently under 100 F, warm her up. A couple ideas: Put the baby in a box with the head out, and use a hair dryer through another hole in the box to “shoot” in hot air, or wrap the baby in a plastic bag (with the head out!) and dunk in a warm water bath (you don’t want to get the baby wet). Laying the cria on warm water bottles can also be effective.

Vitamin D supplementation (usually mixed with vitamins A and E) is very important in most areas of the U.S., especially in the northern, cloudier climates. Many crias without Vitamin D supplementation develop rickets, especially the fall/winter babies who don’t get much sunlight while they are growing. We’ve always recommended giving the paste every 2 weeks until there is enough summer sun. Lots of people are now using the injection because it lasts longer, so you don’t have to do it as often. The dose generally recommended at 1000 IU per pound. Use caution as Vitamin D in the injectable form comes in varying concentrations--read the label carefully for the number of IU's per ml  as it is possible to overdose. Give this in the first week, repeat every 2-3 months in winter for the first 1-2 years. Many people recommend giving the injections in November, February, and April (take the summer off.)

Vaccinations in camelids are controversial and most people have to decide with their veterinarian how best to protect the health of their herds. The only vaccine we administer is CD & T.  It is a core vaccine that is recommended by most vets.  Clostridium Perfringens type C and D and Tetanus Toxoid are bacteria which are common environmental organisms that can cause fatal disease in alpacas.  We start our youngsters at 3 months of age with 2cc of CD & T, repeating in 30 days, then boosting yearly thereafter. 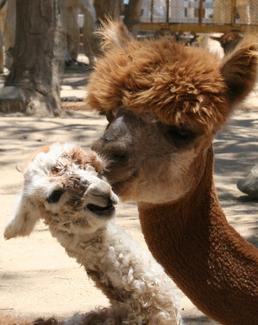