Head and legs out

Getting to know baby 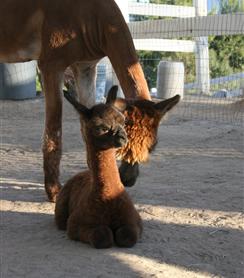 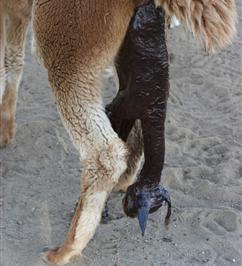 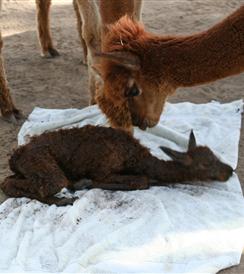 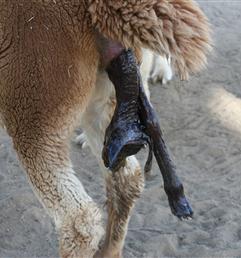 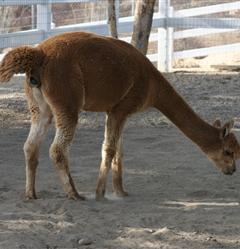 We have been fortunate to have experienced almost one hundred births at the Alpaca Hacienda, and every birth is just as exciting as the first.   Here, we would like to cover some of the things we have learned about this most amazing, but sometimes stressful time in owning and breeding alpacas.

Alpacas have a gestation length of 335 to 365 days, with 350 days as a mean. Some gestations have reportedly gone 370 days, but this is extremely rare.  Unlike other ruminants, alpaca delivery occurs predominantly in the morning. In fact, 90% of deliveries occur between the hours of seven and eleven in the morning. It is unusual to have any births after two o'clock in the afternoon, although here we have had several, with the latest going into labor at about 5 pm.

Most alpacas deliver 'by the book', without our help. But since our business is producing alpacas, and it takes almost a year to get one, it's well worth the effort to learn how to tell when your girls are about to deliver. You want to be there, in the rare case when the dam or baby needs help.

The process of delivery is divided into three stages of labor. The stages will be briefly outlined below; however every birth is unique and you may see a variation in the signs and progression of labor.

This stage can last from 2 to 6 hours.  It is in this stage that the cervix relaxes and the fetus is properly positioned in the birth canal via uterine contractions. Some of the common signs are:

If we see any one or two of these things, we know we are getting close. If we see several of them together, particularly physical changes to the udder and vulva, in combination with vocalization and visiting the poop pile, we know the alpaca is in the early stages of labor.

Uterine contractions increase in frequency to aid expulsion of the cria. The female may lie down and rise up several times; there is abdominal straining; the amniotic sac (or water bag) may appear at the vulva and rupture. (Note: much less fluid is released than in other species).  Contractions become very evident and occur close together. The female may have some short rests during this stage, so don't panic if you perceive that things are starting to stall. Both forelimbs appear together at the vulva and the head emerges either above or below the legs. Once the head appears, delivery is usually completed quickly but the female may rest before pushing out the shoulders. One little trick we have learned is if you have the head and forelimbs out but things aren't progressing, gently grasp the cria's neck and legs together and rotate the cria about 45 degrees. Sometimes that's all you need to release the shoulders and get the cria to slide out. Most females deliver in the standing position. Stage 2 is usually completed in 30-45 minutes.

The placenta usually passes within an hour after birth, but sometimes can take longer.  If the placenta hasn't passed within 6 hours, call your vet.  New mothers do not eat the placenta as is the case with other species, nor will she lick the cria. Check the placenta for any tears, it should be intact and filled with fluid. Carefully dispose of the placenta as it will attract predators to the area.  Never use your bare hands to pick up the placenta; always use gloves.

Often times the mother will not be interested in nursing their newborn until after the placenta has passed, so be watchful, and be patient.

Veterinary attention is required if :

The newborn cria is often covered by a very thin membrane which dries and rubs off easily. This may need to be gently removed if it is around the nose and mouth. Don't pull the membrane off of the toes; they are still soft and can be damaged.  After a successful birth, cria and dam should be left alone to bond. If the rest of the herd is getting in the way of the bonding process, or if one of the other dams is overly interested in the cria, new mom and baby can be moved to a smaller area, but very close to their herd.  You may even put another female in the pen for companionship.  From this point on, observations should be made from a distance.

Your new cria has arrived!  Now what?  Click here for Neonatal Care.